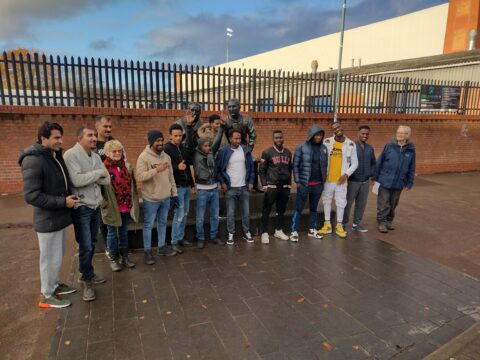 It was a full crowd at Notts County today for their match against Yeovil.  And among the crowd was a group of asylum seekers who had been dispersed to Nottingham by the Home Office. Thanks to the generosity of Notts County Foundation and the professional football club, Notts County FC, Nottingham City of Sanctuary was able to offer 10 free tickets to the asylum seekers.  The Nottingham branch of Care4Calais also bought some tickets but unfortunately they were at the away supporters end!  But it doesn’t matter.  The whole point is that through the generosity of the football club and supporters of Care4Calais, about 20 men were able to mix with the home community and have a wonderful afternoon being a part of the 16,000 supporters of the beautiful game.

Nottingham City of Sanctuary would like to thank Sam Crawford from Notts County Foundation for obtaining the tickets.  We are working with the Foundation towards Notts County becoming a football club of sanctuary.